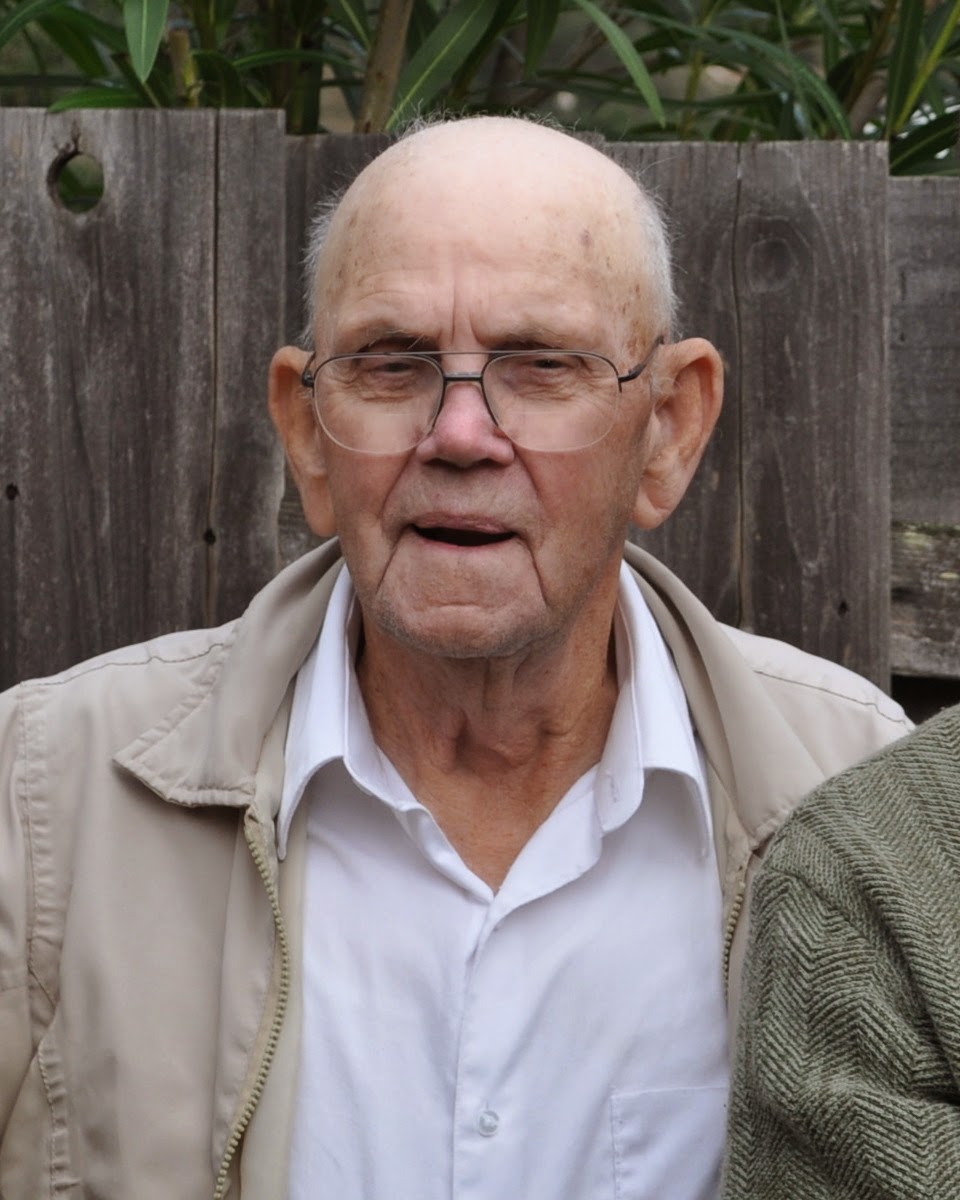 My beloved Grandpa Leon Thurman Scroggins died on February 6th, 2014, in the early afternoon.  He was an urban homesteader before that was even a thing.  My earliest farm- and garden-related memories involve my grandparents’ home in Denair, CA.  There were single tomatoes that overflowed from my two hands held together and peaches so warm and juicy that I had to eat them outside and rinse off before being allowed in. As memory serves, Grandpa picked them with something fashioned out of a broomstick and an old tin can with a side cut out.

His story is that of so many of his generation.  He was born March 31, 1920, in Texas the third youngest of seven siblings, three boys and four girls.  He came of age during the Great Depression and from a young age he worked hard for very little.   He joined the Civilian Conservation Core and did work throughout the Southwest including Carlsbad Caverns, New Mexico.  I can’t count how many times Grandpa would wander down the hall to his bedroom and bring out his memorabilia from that time.

When the U.S. engaged in WWII he enlisted in the Army.  He was stationed throughout Texas and California and was trained and worked as an Army mechanic.  His eldest brother JD died stateside during WWI and his middle brother Herman was a Japanese POW for several years during WWII.  Leon was stateside until the very end of the war when he was sent to Korea in preparation for the land invasion of Japan that never happened.  Grandpa was always very matter of fact and humble when talking about this part of his life, but he was proud of what he did.  I am too. 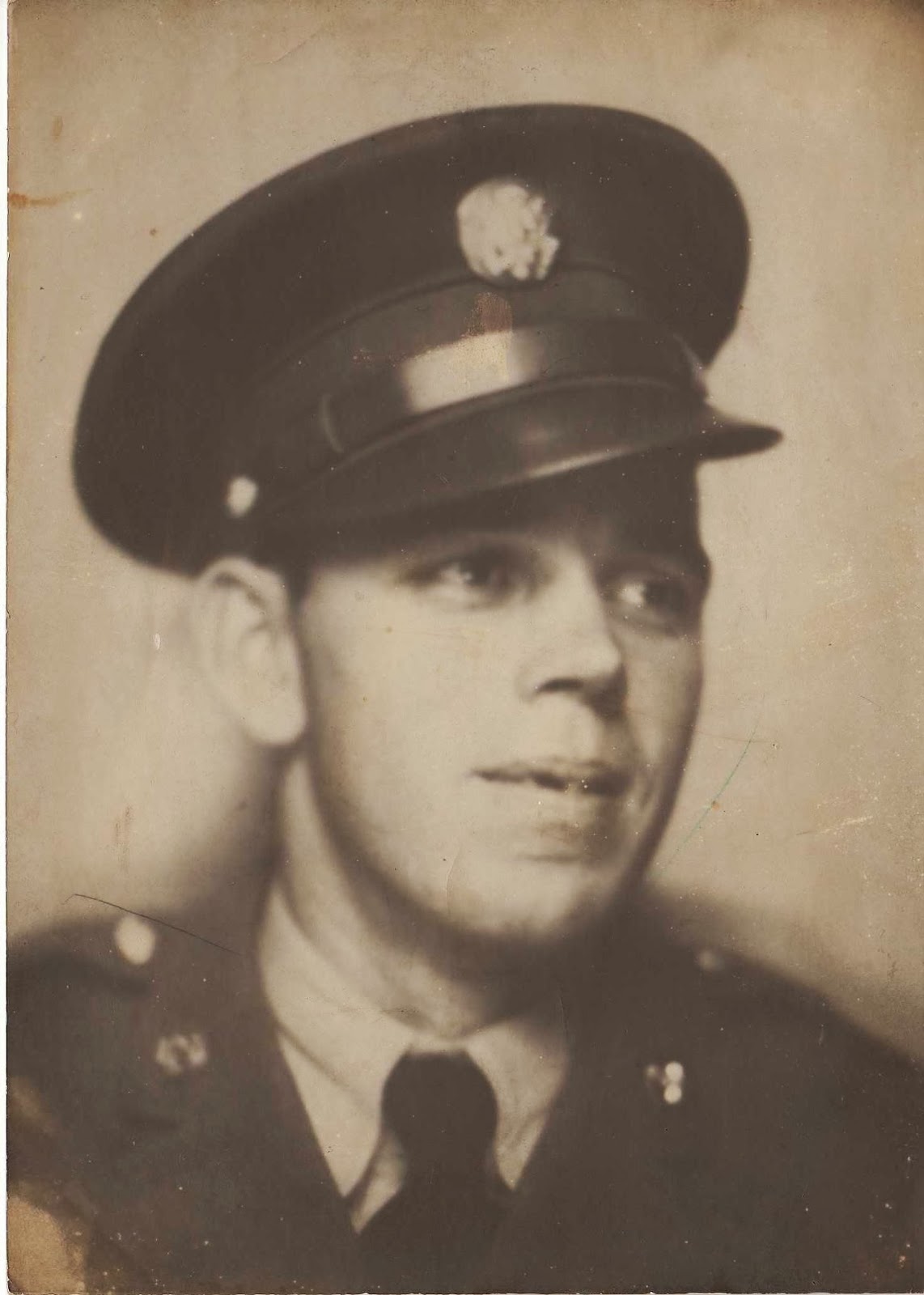 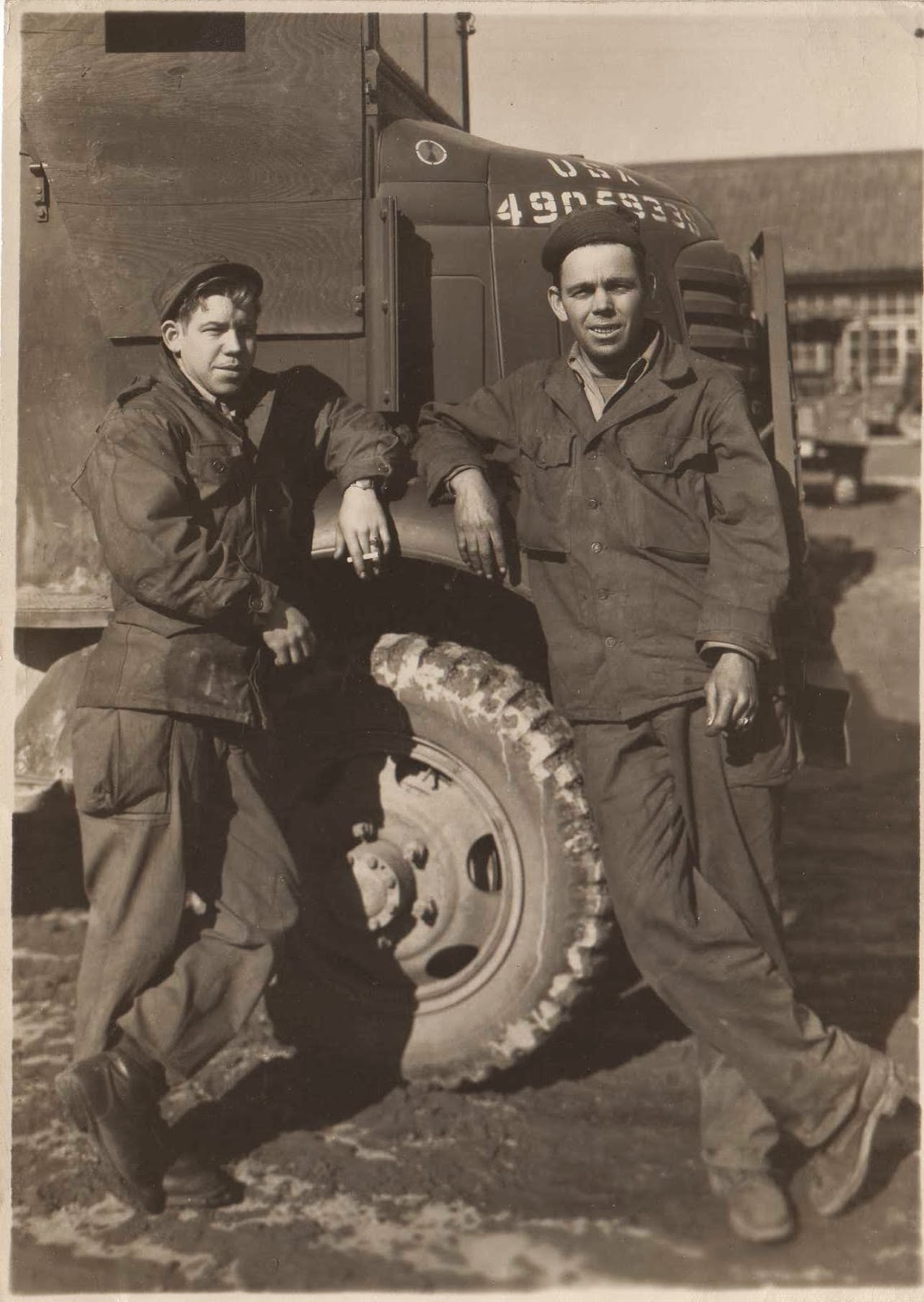 He returned to Texas after the war, but there wasn’t work to be had so he hitchhiked out.  The week he died, the East Coast experienced terrible weather and he teased, “I sure am glad that first ride was heading west.”  He landed in Madera, CA and met Dessie Mae Fuller.  Just a few months ago, Grandpa was telling me about this and said he was in pretty rough shape, but Dessie loved him and took him in.  They were married shortly after meeting and had one daughter, my mother Joice.  I did not know Dessie but my mother described Grandpa as very sweet and affectionate with her.  I can believe it.  He took work as a truck driver and made a good life for his family driving milk trucks throughout the Central Valley and San Francisco Bay Area.  Grandpa was widowed at the age of 51 when Dessie died.  He was steadfast in his love and caring for her until the end of her life.

Grandpa was lost after Dessie died and my mom encouraged him to check out the Modesto Single’s Club.  There he met Evelyn Saffer Vessel, a widow as well.  They caused a bit of a ruckus when, in August 1972, they off and eloped just weeks after meeting.  Evelyn had five grown sons and Grandpa says they weren’t too sure about him at first, but in time they became his family, too.  He told me often, “I married Evelyn, but then I got all these others, too... a real big family.”  He counted it as a blessing.  Between the two of them they had 6 kids, 16 grandkids, at least 25 great-grandkids and at least 3 great-great-grandkids. 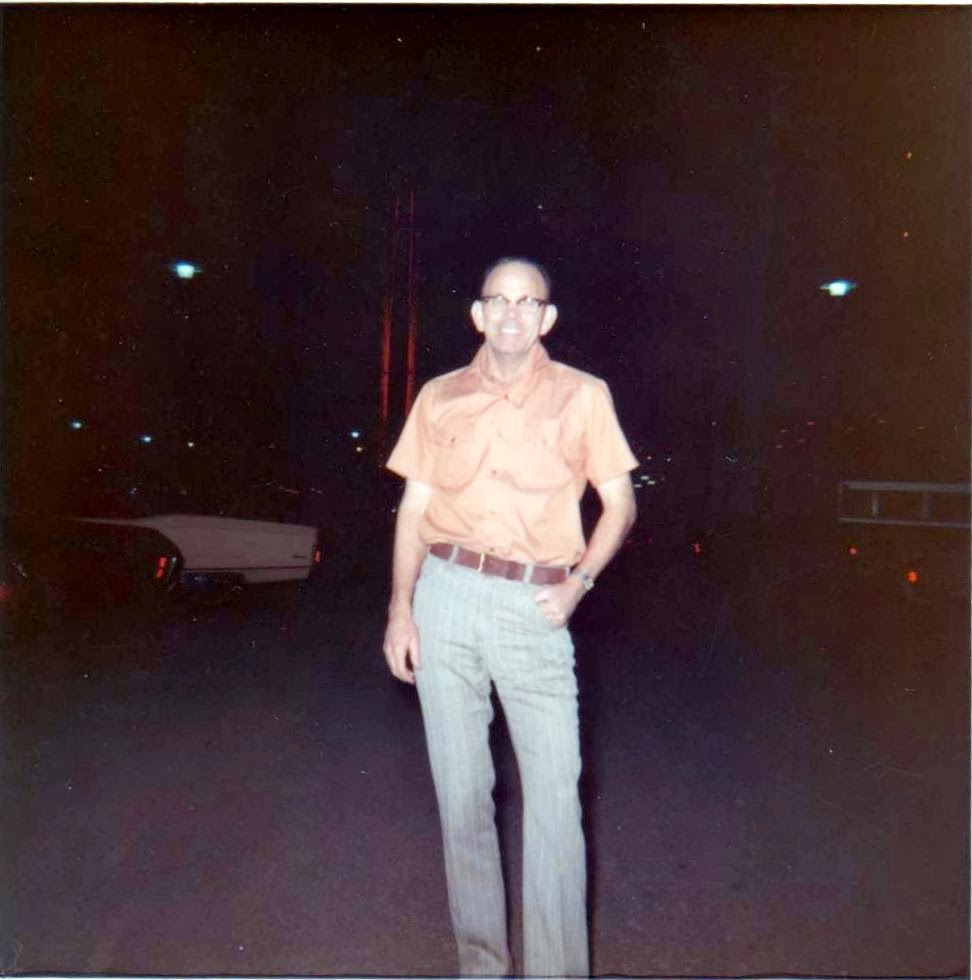 When Grandpa retired in 1982, they moved to a smaller home in the town of Turlock and spent time at yard sales, flea markets, and road trips to visit family in California, Oregon, Arizona, and Texas.  They ate Total cereal for breakfast, and enjoyed lunch out nearly every day.  At first they had a fondness for Burger King, but discovered Jack in the Box on Lander when it opened in the early ’90s and made that their habit.  When they decided to stop driving, they took to walking to Jack in the Box as long as the weather permitted.  That walk was his favorite part of his day and he did so until just three days before he died.  He’d go down, have lunch, and spend time with friends.  Grandpa never fought against aging or wallowed over the perceived loss of freedoms.  He just shifted his routines and came up with plan to do things differently.

After 34 years of marriage, Grandpa was widowed again when Evelyn died in 2006.  My mother moved in to help make sure he could stay comfortably in his home.  He discovered that being an octogenarian then nonagenarian came with some perks.  Everyone would take a minute to chat with him, and he could get a hug from just about anyone.  He fancied himself a flirt and loved to chat with the ladies at the doctor’s office, on the bus, at the lab, around the neighborhood, and, of course, Jack in the Box.  True to form, the last words my mom heard him say were to a young EMT when, with a little smile and a twinkle in his eye, he said, “You sure are pretty.”

I will carry with me countless memories and phenomenally wise and witty things he said including:
-His presence at my graduations
-Him meeting my two children
-His always forgiving embrace no matter how long it had been since we’d seen each other
-His concern about me giving up a union job at Thrifty’s to go to college, followed with, “Well, I guess she’s got to get all the schooling she can.”
-His response to a brand-new car breaking down, “Well, I guess that don’t matter much that it’s new.”

-His reply to my tears when I saw him just two days before his death, “I’m not afraid to die, hon.”
-The last words he always said to me, “I love you.”

He was not afraid to live or die and did so on his terms.  He entered into the last days and hours of his life with grace and good humor.  I love him and miss him terribly. 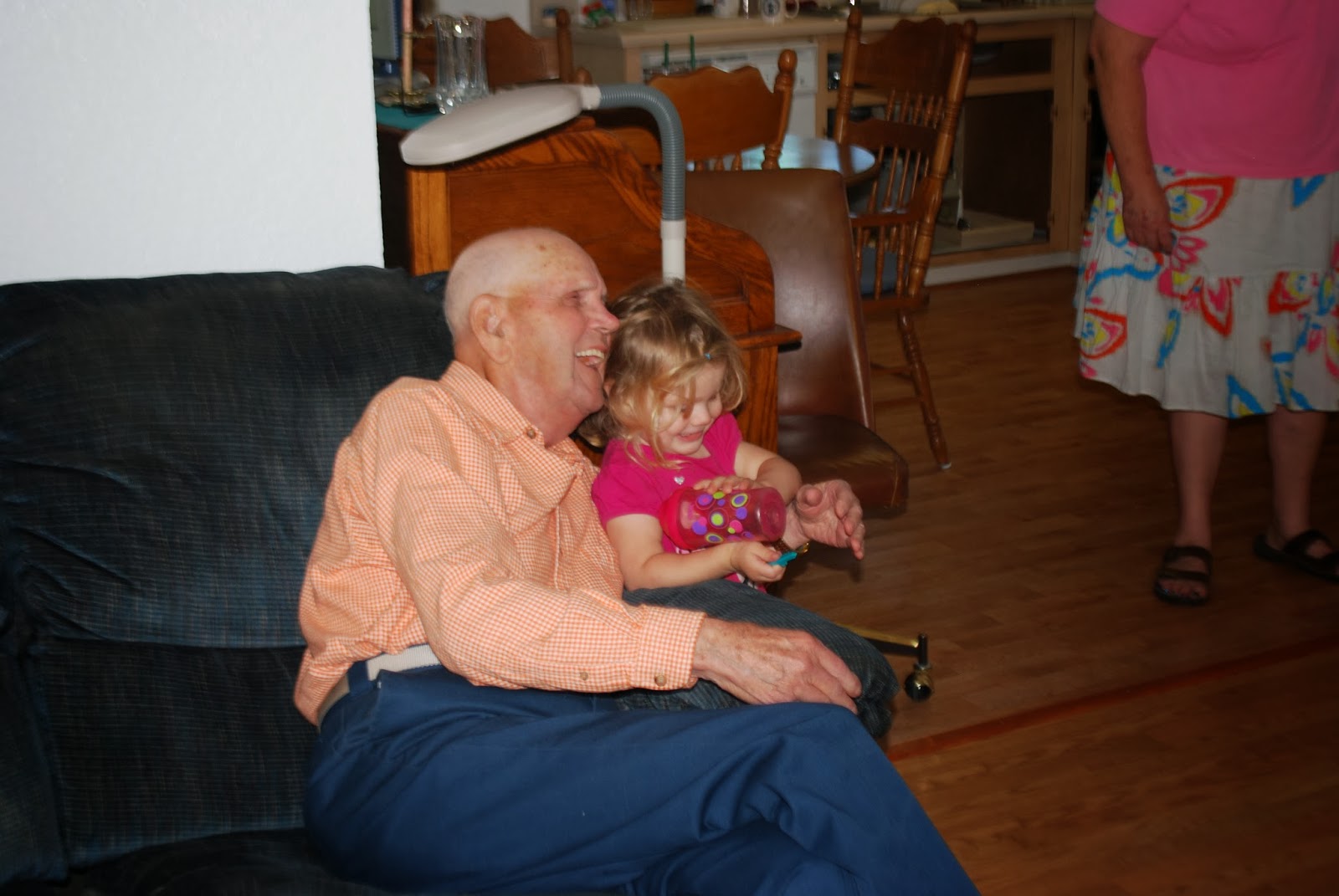 Catching Victoria as she'd run down the hall into his arms

Tenesa
Hi I’m Tenesa (like Teresa but with an N). I hung up my professional hat a few years ago to jump into the ultimate cage fighting circuit. I mean to become a stay a home mom. It’s easy to confuse the two. My family and I live, just 25 miles north of the Golden Gate Bridge. We have a boy, a girl, a picket fence out front, and a built in BBQ in the back. We are living the dream.

I'm not a revolutionary. I'm just trying to do the right thing by my kids, my family, my neighbors, for the moment and into the future. Sometimes I'm not sure what "right" is. I figured a good place to start was to go back to the basics, gardening, old school home economics skills, and repurposing what we already have. I figure if I drag my kids along for the ride, they might learn some important life skills and lessons too.

This blog is for me to journal this experience and maybe turn my internal monologue into an external dialogue with you all. Someone described my blog title as fun, quirky, and relatable. I hope that is how you experience it.